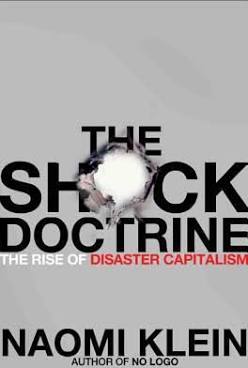 (It’s a bit longer than our usual reads, but read as much as you can and we’ll discuss at the end of the month!)

Back from our first break month (where our chapters worked on some amazing projects, from a prison book drive in Boston in solidarity with the national prison strike to a sold-out panel and spoken word performances in London!) and we’re ready to dive right back into a major, fundamental, shocking read: none other than The Shock Doctrine by the brilliant Naomi Klein! Hailed as “the most important book on economics in the 21st century” and one of the “very few books that really help us understand the present”, The Shock Doctrine explores some of the major moments from recent history, from the 1973 US coup in Chile that brought Pinochet to power to the 1991 collapse of the Soviet Union to the 2003 invasion and military occupation of Iraq, to illustrate how the intentional creation of major crises (“shock therapy”) is crafted and manipulated to push neo-liberal economic policies that now dominate the world. I.e. why capitalism sucks and how it came to rule.

This book is especially important and especially important now, as it A) helps us re-frame and re-understand the world as it is today and continues to be shaped with Trump and Trump-like politicians becoming ever-powerful, and B) brings back to life several key instrumental moments in recent history that we have started to conveniently wash away, forget about, and sanitize (*cough* John McCain is and always will be a war criminal and no amount of candy his war criminal colleague Bush passes to Michelle Obama will change that *cough*). Still yet, the US military occupation of Iraq is very much still ongoing and New Orleans has still not yet recovered from Katrina — episodes which, through Klein’s lens in The Shock Doctrine, we can learn so much about the role of intentional, global neo-liberal policies in shaping the world, and through it, re-understand recent history and contemporary global issues.

+ Additional resources, primary documents, and related articles on The Shock Doctrine on the book’s website

+ “Neoliberalism – the ideology at the root of all our problems”, essay by George Monbiot in the Guardian

+ “How to Resist Trump’s Shock Doctrine”, a video providing an overview of a 5-step plan of resistance by Naomi Klein on the Intercept

+ Naomi Klein’s writing (in English & Portuguese) for the Intercept

+ “The Economic Hitman”, a 3 minute youtube clip on the relationships between corporations, global economic policies, and the military industrial complex

+ Naomi Klein on capitalism and the climate, Ideas at the House podcast